Introduction : the TGV project
The world of the TGV in Belgium : the trains, stations and lines in Belgium

Map of the TGV network in Belgium : the lines and stations
TGV Destinations : what stations can you get to by TGV from Brussels
TGV timetables and fares : all the tariffs and schedules

Return to the index to the TGV section

The TGV network in Belgium is seen as an integral part of the future European High Speed railway network, which is designed to provide a total of some 29000 kilometres of through routes suitable for operation at 250 km/h or more between major cities like Madrid and Stockholm, or London and Naples, by 2010. France has provided much of the impetus behind this plan, by demonstrating the potential for high-speed rail with its pioneer line between Paris and the Southeast France, opened in 1981. Since then, five other European countries have folowed this example more or less closely: Italy, with the Pendolino (a tilting TGV), Germany with already three generations of Inter-city Express (ICE); Spain, with the Alta Velocidad Espańa (AVE); Sweden with the X2000 and now Belgium. Because of of its position as the 'crossroads of Europe', Belgium is at the heart of this ambitious project. This is evident from the way in which Brussels is already the main point for interchange between the Eurostar services to London and the Thalys services between Paris and Amsterdam or Cologne, as well as many others.

The world of the TGV in Belgium

Today, the high-speed train appears to be the saviour of the railways. For, since the 1960s, the SNCB (Belgian railways) has been abandoned by almost one in two passengers and its network has shrunk by about 30%. Yet, only the railways can provide the solution to the increasing problems of traffic jams in towns and congested highways between them. These problems have an economic impact as well as an ecological one, because they (delays, accidents, pollution etc.) indirectly increase the cost of transport by some 4.5% of the GNP, ten thousand billion BEF each year, 92% of which is attributable to road transport!

The new high-speed lines will thus form the backbone of the Belgian rail network, into which the lines inherited from previous generations are closely integrated, but with traffic flows extensively re-oganised in accordance with the STAR 21 plan. There will be some 300 km of new lines, two thirds of which will be suitable for running at 300 km/h. They are:

Three types of TGV are currently running in Belgium:

Although TGVs can, of course, call at any existing station in Belgium with platforms at least 400 m long, the stations where TGV services are scheduled to call most frequently are being upgraded and rebuilt to provide suitable facilities for this purpose. Access to Eurostars, in particular, must be restricted to persons who have passed security checks. The three stations with the most frequent TGV services are:

Of course, these are not the only stations in Belgium to be served by TGVs; the other main cities will continue to have daily connections to Paris and perhaps in future also to other points on the European high-speed network. And the SNCB already envisages that it will be neccesary to build a second TGV station for Brussels near the point where the line from Amsterdam joins that from Cologne, in Schaerbeek, when the traffic has become too great to be handled at Brussels Midi/Zuid alone. By that time (about 2010), it may be expected that frequent direct Thalys services will be linking Paris CDG, Brussels National and Amsterdam (Schipol) airports in replacement for the present air services between them.

In the case of Belgium's first high-speed line, once the civil engineering work (embankments, cuttings, bridges etc.) was complete, an average of 1530 metres of the 149 km of track between Lembeek and Esplechin was laid every day. This involved installing 700 thousand tons of ballast, 250 thousand monobloc concrete sleepers and 18 thousand tons of rails, using a special technique. Operation at 300 km/h requires track that complies with a particularly high standard of precision and stability.

The two tracks of the high-speed line are laid 3 metres apart along a corridor with a surface 15 metres wide. The rails are delivered in sections with an average length of 288 metres which are welded together and attached to 1666 sleepers every kilometre. The sleepers are first laid on a layer of ballast 35 cm deep, and then more ballast is added until the sleepers are fully enclosed by it, so that only their tops remain visible.

Of course, there are no level crossings as the line is completely enclosed by a wire fence. The maximum gradient is 1 in 100, and the minimum radius of curves is 6 km, which means that a right angle bend corresponds to a track length of some 9.42 km. Unlike most other lines in Belgium, which are electrified with the 3000 V DC system, the high-speed lines are electrified at 25 kV 50 Hz.

A special signalling system is also used, not because at 300 km/h the driver would not have time to observe conventional track-side signals, but also because they could not provide all the information he needs. So high-speed lines are equipped with a cab-signalling system known as TVM or TBL, depending on the design. The principle of operation is that of dividing the track into a series of blocks (or sections) in each of which a speed limit is set separately. As only one train is allowed to occupy any block at a time, the corresponding speed limit can be transmitted to it through the rails by means of signals at certain frequencies. On board the train this speed-limit information in the received signals is decoded by a computer, and displayed in the cab beside the train's own speedometer, so that the driver can compare them whenever necessary.

For more detailed information, see the pages on the construction of a high-speed line and on the signalling system for high speed lines.

The TGV Finance Corporation (FTGV) is a public company created specially in 1997 to provide the funds needed to finance the TGV project within Belgium.
It is itself funded from various sources, including 32 billion BEF from the Federal Shareholding Company (largely the proceeds of the partial privatisation of the Belgacom company) and 10 billion BEF in the form of land and buildings from the SNCB, with the rest coming through loans, notably from the European Investment Bank.
So far as the rolling stock is concerned, the FTGV will cover 4.5 billion BEF and the SNCB will provide the remainder.
The FTGV is thus contributing a total of 125 billion BEF to the investments in the Belgian TGV project. These funds have been made available to the SNCB in stages, the last of which was the 15 billion BEF paid on 30 June 2000.

Although the Belgian TGV project is not due to be completed before the year 2005, many of its benefits in terms of the improved comfort and speed of modern rail travel are becoming available much sooner. For details of the TGV stations and timetables, click here

*When all the work is complete, probably in 2007

Map of TGV lines in Belgium 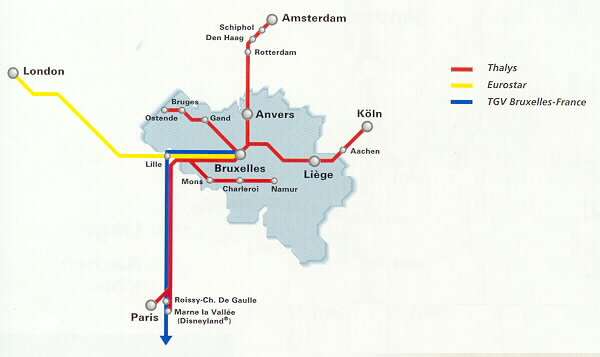 For more details of the features of each line, see the pages on the Belgian TGV Network

Return to the index to the TGV section.

This page is maintained by David De Neef. Translation by Alan Reekie. Last revised on 01/23/02 .
It has been seen by visitors since 12 August 2000.